South Korea has been dethroned by China in panel production for the first time in 17 years as Chinese names expand fast in the OLED segment after dominating LCD under state grooming.

Korea had kept to No. 1 in panel sales for the last 17 years.

It had been 11 percentage points ahead of China in the global display market by market share until 2019. China, however, managed to outrun Korea as prices of LCD panels, Chinese players’ mainstay panel products, have jumped sharply since last year when the pandemic drove up the demand for TVs, laptops, and other screen devices from social distancing practices.

Chinese display makers are also rapidly expanding their presence in the premium panel OLED market. According to Omdia, China’s share in the small- and medium-sized OLED panel market is projected to reach 15 percent this year and 27 percent next year. Chinese players accounted for a mere 5 percent of the segment in 2018. Meanwhile, Korea’s Samsung Display is expected to see its share in the smartphone OLED panel market fall to 60 percent next year from current 80 percent, projected Seoul-based UBI Research. 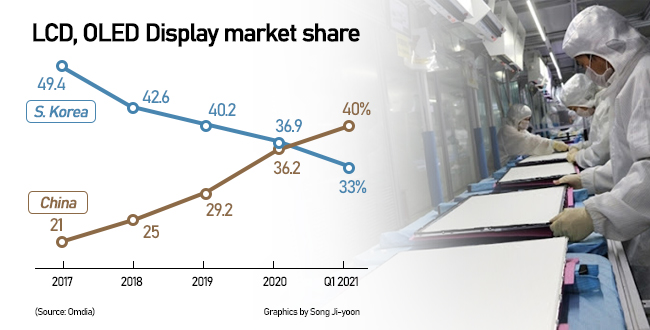 이미지 확대
When BOE Technology constructed its first 10.5-generation LCD line in Hefei, China, the company put up just 6.5 percent of total 46 billion yuan ($7 billion) injected for the construction. The rest came from public companies under Hefei city government and bank loans with guarantees from the government.

BOE Technology had received over 2 trillion won ($1.7 billion) via direct government subsidies for 10 years from 2010, tantamount to 59 percent for the company’s net income made during the decade, DB Financial Investment pointed out.

In addition to massive subsidies, the Chinese government provides free infrastructure such as land, building, industrial water, and electricity. Display makers in China are imposed only 13 percent of corporate tax compared with the normal tax of 25 percent, and zero duty is granted on imports of display-making equipment and materials. Thanks to such benefits, Chinese display makers’ production costs stand only 71 percent of Korean firms’.

Korean display makers in contrast have near-zero support from the government.

They get up to a 6 percent tax break on investment but under strict conditions. The government provides duty benefits on equipment and materials imports on select items.

Korean display makers including Samsung and LG are planning to invest 30 trillion won for upgrades and capacity increase by 2025, according to the Korea Display Industry Association.

The Korean display industry is calling for increased state supports on their investment efforts, such as including OLED and quantum dot LED display technologies to the government’s category for special tax benefits.