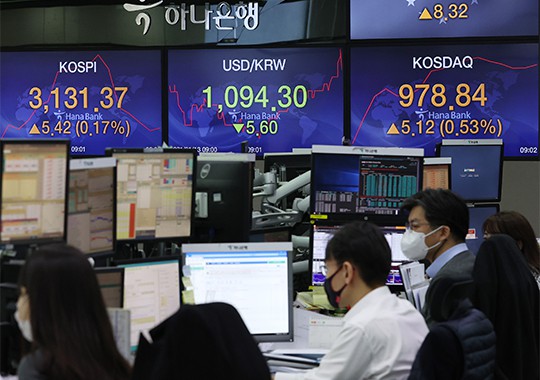 South Korea’s plan to normalize short sale from March has already unsettled retailers who have driven the Kospi to unprecedented levels during the year-long ban, with as much as 47.8 trillion won ($44 billion) in open short position that could weigh down the market in the short term.

According to Korea Financial Investment Association on Tuesday, about 47.8 trillion won remains in the balance of borrowed stock account that has not been closed as of Monday. The amount is about 28.6 percent smaller than 66.9 trillion won on March 16 when the financial regulator issued a ban on short sale amid market rout at the onset of Covid-19 outbreak.

Short sale works by borrowing stock from stockbroker and selling it back in the market and leave an open short position. The short position is closed when the stock is bought back for a profit.

That much in the open short position suggests the load is in waiting to be unleashed for profit-taking. 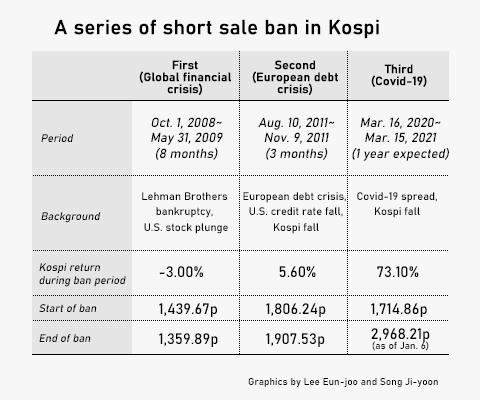 이미지 확대
Once the cap on short sale is removed, the Kospi inevitably could crash, given 78 percent gain in the Kospi during the ban.

Analysts agree a correction is inevitable, noting overshooting in large-cap stocks after the stock market served as the playing field for retailers in the absence of foreigners who profit largely from short-sale strategy.

Seo Beom-jin, head of growth management division at Samsung Asset Management, said that investors could sell highly-priced shares versus their valuation in March when the short-sale ban is lifted, leading to an overall price adjustment in the market.

Noh Dong-gil, an analyst at NH Investment & Securities, noted that Kospi 200 and Kosdaq 150 stocks have become overvalued. Kospi 200 shares have now been normalized but Kosdaq 150 spot have increasingly been overrated, he said.

The correction would be shorter for large-cap stocks and last longer for smaller stocks, given similar cases in 2008 and 2011. 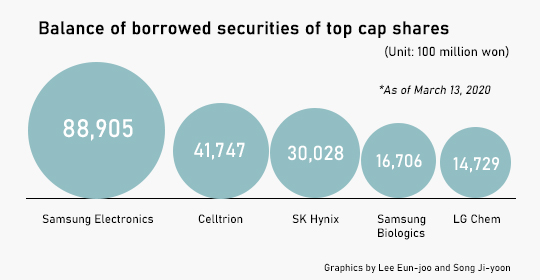 이미지 확대
According to Korea Financial Investment Association, Samsung Electronics shares remain most in the borrowed account in open short position, followed by Celltrion, SK Hynix, Samsung Biologics, LG Chem, Kakao, and Naver. Since they are top large-cap stocks, they will likely bounce back after a correction of one or two months.

“Funds will flow into the stock market as investor sentiment towards bonds will weaken once interest rate rises gradually with improved economy in the year end,” Seo said, noting that the U.S. dollar will continue to weaken with ample liquidity in the market through economic stimulus measures under the new Biden administration in the United States.

Foreign investors also could jump back into the local bourse in full force, helping to save the upward momentum, said Shim Hyo-seop from KB Asset Management.