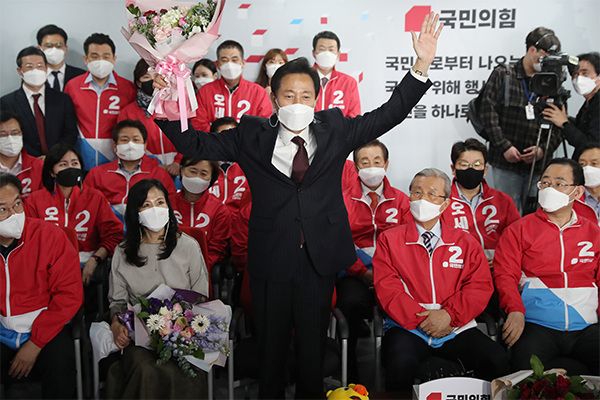 Conservative opposition candidates swept key byelections on Wednesday, dealing a heavy blow to President Moon Jae-in’s governance in his final year and the liberal front’s aspiration to extend governing rule through the win of the presidential election in spring next year.

The candidates from main opposition People Power Party (PPP) won the mayoral seats in Seoul and Busan, the second largest city in South Korea, by a comfortable margin of around 20 percentage points against their opponents from the ruling Democratic Party. Both replace liberal chiefs disgraced by sexual harassment scandal.

It is the first election win for the conservative party since the legislative impeachment of President Park Geun-hye in 2016.

Oh Se-hoon returns to Seoul City Hall he yielded to human rights lawyer Park Won-soon who reigned for 10 years until his third term ended with a sexual scandal and death. He beat Park Young-sun, political big wig of the ruling front and formerly SME and Startup Minister, through a vote of 57.5 percent versus 39.18 percent, according to National Election Commission on Thursday.

The turnout ratio was exceptionally high for a vote on a business day – 58.2 percent in Seoul and 52.7 percent in Busan.

Turnout ratio in Gangnam district, most severely affected by spikes in housing prices and tax bombardment, hovered above 60 percent with support for Oh more than tripling over Park. 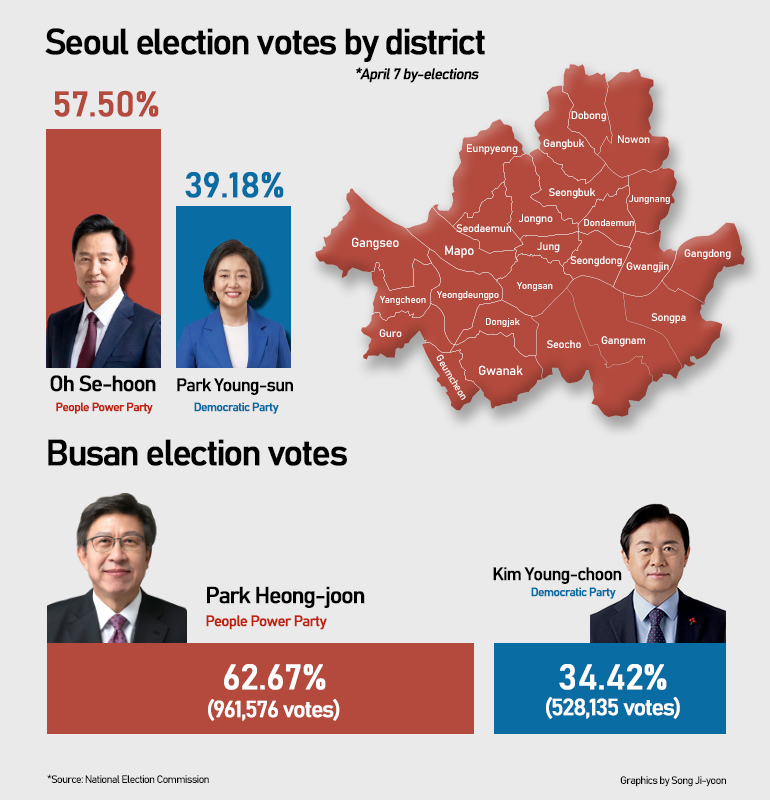 The results were entirely the opposite of last April parliamentary election where DP commanded near 180 out of 330-member legislative seats.

The approval rating of Moon and the ruling party that hovered around 60 percent nearly halved over the last year due to repeated failures in real estate policy that rocked the housing and rent market and vaccine program on top of a string of two-faced scandals involving the state housing authority and policymakers in pursuit of profits from housing.

“The landslide victory for the opposition in relatively high turnout suggests angry conservatives came to the poll stations while shy liberals chose to stand off,” observed Lee Jong-hoon, a political critic.

Voters chose Oh across the age except for 40s to underscore the rage by 20s and 30s for being left out in job and housing market, he added.

“It should be a happy moment… But I am under heavy responsibility when I think of the citizens in a state of anxiety and distress due to Covid-19 and economic difficulty,” said Oh as he returns to the office he departed after losing make-or-break referendum on free school meal policy 10 years ago.

Oh, 60, started off his career as a lawyer after studying law at Korea University. He joined the political scene after being elected as a member of the 16th National Assembly. He was elected as the youngest Seoul Mayor at the age of 45 in 2006 and was re-elected over his rival and former Prime Minister Han Myeong-sook in 2010 and made his name among the presidential candidates.

Oh staked his seat to oppose to free school meal scheme by liberal education superintendent. The referendum was rejected due to low voter turnout, forcing Oh to take responsibility and step down in August 2011.