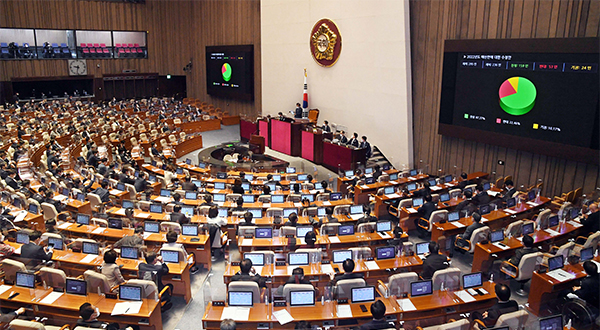 The endorsed budget bill would be another largest-ever, increased by 8.9 percent from the original 2021 budget scheme excluding two sets of increases through supplementary budgeting.

The final budget exceeds the government’s earlier proposal by 3.3 trillion won, the second consecutive year that the legislature under command of the ruling party has bumped up the state-proposed budget.

Since Moon was inaugurated to a five-year term in May 2017, fiscal expending growth more than doubled from the past conservative governments. The original budget (without counting supplementary increases) rose 7.1 percent in 2018, 9.5 percent in 2019 and 8.9 percent in 2020.

The budget includes 68 trillion won worth of grants and compensation for small businesses hurt by the pandemic.

The budget for healthcare and virus control was scaled up by 1.4 trillion won to curb resurgence and support the country’s return to normalcy.

A total of 351.6 billion won will be dedicated to purchasing oral Covid-19 drug for 404,000 people and 390 billion won and securing 14,000 hospital beds for critically ill patients.

The government has increased budget for childcare support by 239.4 billion won to raise the amount of monthly government subsidies for children aged 3 to 5 who attend kindergartens by 20,000 won.

Lawmakers have also earmarked 48.1 billion won worth funds to build an emergency supply chain for strategic commodities like urea and rare earth metals.