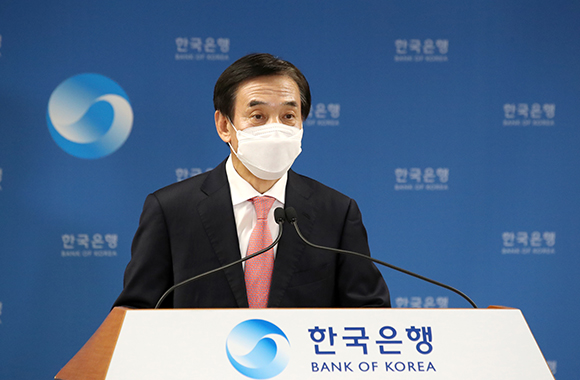 Upon bringing the base rate back above 1.0 percent after an unprecedented loose policy to fight Covid-19, the Bank of Korea on Thursday indicated it will proceed with “normalization” of rates until the dangers of inflationary and household debt buildup ease.

“The economic recovery won’t likely be affected by the latest raise, when taking account of the present financial and economic circumstances. We have to see why we are raising the base rate. It is for normalization, not tightening,” said BOK Governor Lee Ju-yeol Thursday.

Markets stayed relatively calm in response to the outcome of the year’s last monetary policy meeting that delivered a second hike in a quarter of a percentage point after the first lift in the same scope in August to end the country’s test with a historic low of 0.5 percent kept since May last year. 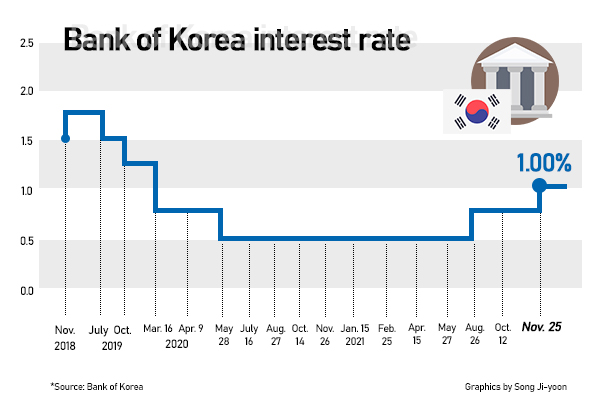 “It is natural for rates to be normalized after an excessive lowering in line with economic developments. We will consider if additional move is necessary by taking into consideration of various factors – economic data and financial market situation,” Lee said.

Lee found the policy rate target at 1.0 percent was still below “neutral”, a theoretical level that can sustain growth without upsetting consumer prices.

Although it is uncertain what level the central bank deems as “neutral”, the base rate had stayed at 1.25 percent from October 2019 before a yank-down to 0.75 percent in March last year after the early Covid-19 outbreak. Before then, the rate moved from 1.50 percent to 1.75 percent from late 2017.

He brushed aside the notion that rate normalization could be interrupted by the political calendar – the presidential election in March and local elections in June-, saying rate move should not be guided by politics.

The central bank in a separate statement was more worried about inflationary movements than an economic recovery from a contraction in 2020.

이미지 확대
The BOK sets the mid-to-long term inflation target at around 2.0 percent.

The inflation rate jumped 3.2 percent in October, recording the steepest annual gain since January 2012. Pressure is also rising quickly from the supply side with producer price index at fresh peak in October.

Despite the threat of going back to tightened mitigation due to undying Covid-19 spread despite the vaccination rate of 80 percent, the central bank is sanguine that strong external demand could fuel growth.

Exports are expected to hit record high this year and further stretch in 2022.

Household debt that has outsized the GDP in the fastest rise among developed economies added another 2 percent to a fresh peak of 1,844.9 trillion won ($1.6 trillion) as of September.