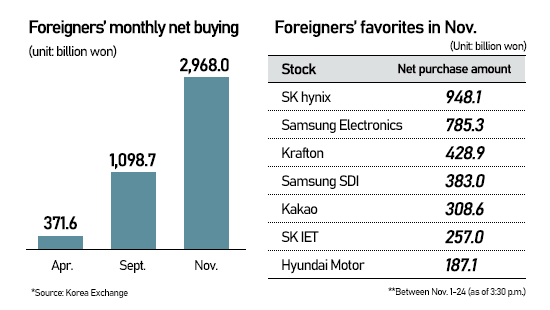 이미지 확대
Offshore investors who had dumped as much as 31 trillion won ($26 billion) worth shares throughout the year have turned aggressive buyers of Korean shares this month, finding them cheaper after lengthy correction and versus a strong U.S. dollar.

According to data from Korea Exchange on Wednesday, foreign investors net purchased 2.97 trillion won ($2.5 billion) worth of Korean stocks between November 1 and 24, shifting position from net selling of 31.6 trillion won from January to October.

The sole net buying months by foreigners this year were April and September, when they purchased a net 371.6 billion won and 1.099 trillion won, respectively.

Individual and institutional investors offloaded a combined 3.3 trillion won worth of local stocks in November as they adjusted down portfolios ahead of tax season.

Foreigners’ buying was concentrated on electronics and IT themes for a net 3.15 trillion won so far in November.

The Korean stock markets appeal to them as they have been under lengthy correction after rallies of last year. The Kospi has been skidding from its peak of 3,300 at the beginning of the year despite record winning streak in the U.S. markets as foreign investors fled from Korea with high reliance on raw materials amid supply unrest.

Many of the high-value stocks have become undervalued as the result.

Park Suk-hyun, a researcher at KTB Securities, found the return of foreign buying suggests a shift in foreign investment on price merits of Koreans shares.

According to Shinhan Investment Corp., the MSCI Emerging Market Currency fell just 0.1 percent over the last four weeks despite the 2.5 percent gain in the U.S. Dollar Index.

But whether and how long the trend will last remains uncertain as Korean markets are susceptible to U.S. rate moves, analysts warn.