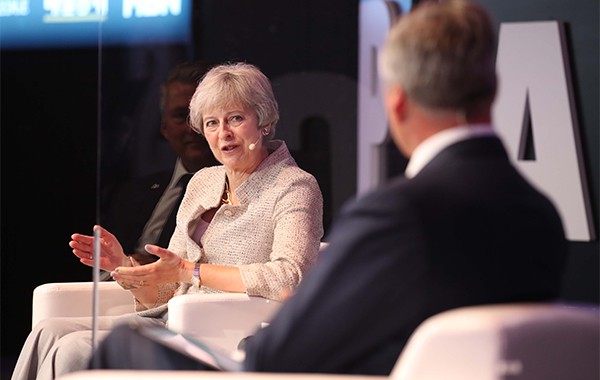 Former U.K. Prime Minister Theresa May Wednesday called upon countries to work together to recommit to the values of compromise and international framework as the times are “challenging than ever” from the unprecedented virus pandemic plaguing the entire global society.

“There is a danger of absolutism in world politics today, encouraged by a sense of nationalism,” May said in the opening session at the 21st World Knowledge Forum held in Seoul and live-fed on social media in a rare international debate amidst the ongoing pandemic crisis.

“Entrenchment leads to isolation, which is not good for any of us, for economic growth, and the future of young people,” she said as she shared the podium with Terry Martin, a senior anchor of DW News who took questions from the “distanced audience” to relay over to the British stateswoman on the theme of governance in the era of pandemic crisis and global slowdown.

“Moving forward should define solutions for multilateral agreements enabling growth for all citizens,” she said as “belief in values of compromise, working together based on international frameworks” comes important than ever as the world fights the common challenges of today.

Although taking a critical tone on the protectionist and nationalistic economic policies of the United States, May who had been reserved about outright excluding Huawei Technologies in U.K. 5G network tender as the prime minister backed the U.S.-led sanctions on the Chinese technology giant as the issue brought the attention to why governments and countries had come to over-depend on a single company. 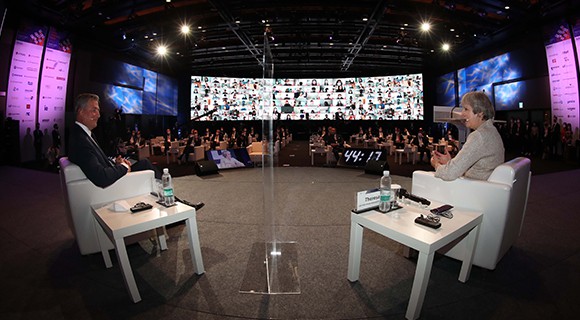 “Why was there not more?“ was the question that came up as the result of U.S. sanctions. “We have come to work together to develop and encourage more marketplace and other options rather than one – Huawei–, a firmer structure, international standards and rules on security that everyone can have confidence,” she said.

She assured that the U.K. as the member of United Nations Security Council won’t change its stance on North Korea or move to remove sanctions unless North Korea’s denuclearization is fully implemented and verifiable as she took a question from Thae Yong-ho, a former North Korean envoy to London while she was a prime minister before defecting to South Korean in 2016.

She expressed “serious concerns” about Beijing-imposed security law and other developments taking place in Hong Kong as they breach the Sino-British Joint Declaration in return for British return of Hong Kong to China.

She suggested Seoul and other options in East Asian sphere as the replacements of Hong Kong as financial centers.

Under the theme of “Pandemics Perspective: Shaping New Global Symbiosis,” this year’s forum offers both offline and online sessions amid social distancing restrictions. Paid audience can join the discussions and brainstorming sessions.