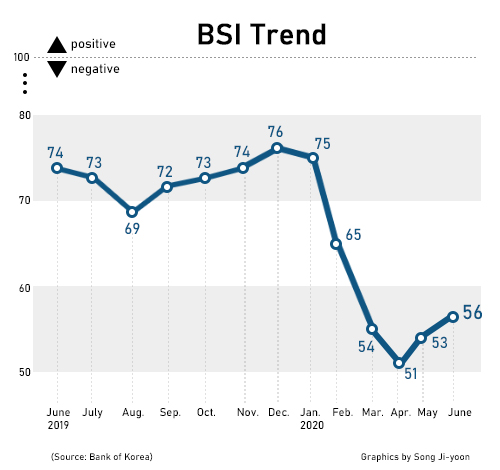 이미지 확대
South Korea’s business confidence in June improved for the second straight month on the government’s aggressive fiscal measures and the reopening of major economies, but remained weaker compared with the time when businesses were still grappling with the global financial crisis.

The Bank of Korea’s business survey index (BSI) of the overall industry for June came to 56, gaining 3 points from the previous month, according to the central bank on Tuesday. It is the second month in a row for the business confidence indicator to rise. But the index is still below 58, the level seen in March 2009 when businesses were still struggling through the aftermath of the 2008-09 global financial meltdown.

The BSI shows how companies judge the current business conditions and their outlook, based on opinion poll. A reading below 100 means more companies are pessimistic than optimistic, and vice versa for a reading above 100.

The latest survey was conducted on 3,696 companies from June 15 to 22, with an 85.8 percent response rate, according to the BOK.

The business sentiment among manufacturers for the month of June reached 51, rising 2 points from the previous month. It was the first improvement in five months but still remained worse than 56 witnessed in March 2009.

Sentiment of both large and small/medium-sized companies improved, up 1 point and 4 points, respectively, from a month earlier. The BSI of export firms jumped 6 points while that of domestic consumption-reliant companies stayed unchanged.

The BSI of electronics/communication device manufacturers added 7 points to 69, and electric equipment makers up 13 points to 54. But the reading of primary metal manufactures plunged 15 points to 37, largely due to the slump in the automotive industry.

Services confidence in June recorded 60, climbing 4 points from a month earlier to mark the second straight month of gain. The BSI of transportation/warehouse operators fell 8 points due to a rise in oil prices, while constructions’ confidence gained 11 points and wholesale/retailers 4 points.

For the coming month, the BSI of overall industry rose 2 points to 55. Manufacturers’ confidence improved 2 points to 51, and services up 3 points to 59.

The central bank attributed the improvement in business sentiment in June to the government’s aggressive measures to prop up the economy and the reopening of major economies thanks to a slowdown in the spread of COVID-19 infections. But entering mid-June, many countries have started to see a resurge in infection cases, dampening hopes for a quick recovery in the global economy.

The economic sentiment indicator (ESI), which combines the BSI and the consumer sentiment index, rose 5.3 points to 63.1. The recovery was the fastest since February 2019.

The cyclical ESI, which removes seasonal fluctuations and other irregular components, fell 5.2 points to record low of 56.4.