S. Korea’s industrial output, investment slump in May amid pandemic

이미지 확대
South Korea’s industrial output and investment slumped in May as the pandemic continued to drag down exports, while demand recovered to pre-COVID-19 levels helped in part by the government’s relief payouts.

The seasonally adjusted mining and manufacturing output in May fell 6.7 percent from a month ago, Statistics Korea data showed Tuesday. This was the same steep decline as April, which marked the biggest monthly drop since the 2008 global financial meltdown.

Against a year earlier, factory output in May dipped 9.6 percent.

Factory operation slipped 4.6 percentage points on month to average 63.6 percent, the lowest since January 2009. Inventory levels rose 2.5 percent on year but remained the same as the previous month.

Chip production jumped 10.8 percent on month but this was not enough to offset the 21.4 percent drop in autos and 12.9 percent decline in machinery equipment. 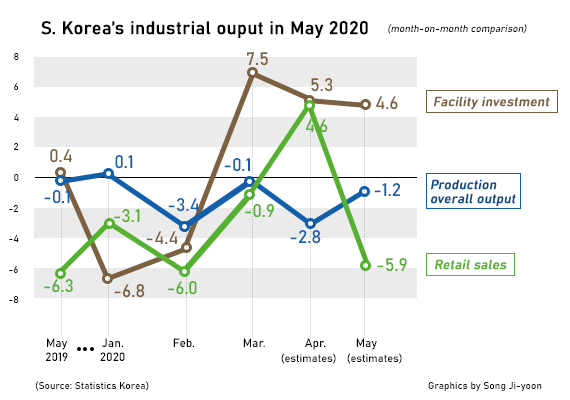 이미지 확대
In May, Korea started handing out cash of up to 1 million won ($817) to all households to boost local consumption hit hard by the outbreak.

The coincident index, which measures present economic activities, slipped 0.8 point to 96.5, sliding for the fourth straight month to hit its lowest since January 1999 in the wake of the Asian financial crisis.

The leading indicator, which is a gauge of where the economy is headed, was also down for the fourth month in a row, falling 0.3 point to a nine-month low of 98.9.