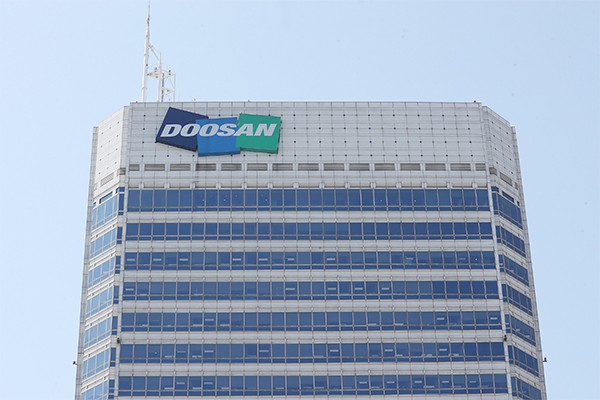 이미지 확대
South Korea’s Doosan Group has decided to take all the responsibility for the litigation risk related to Doosan Infracore China (DICC) to make Doosan Infracore Co. a risk-free company in a move to expedite its sale.

According to multiple sources from the investment bank industry on Thursday, Doosan Infracore will receive final bids for the sale of its 36.27 percent stake on Nov. 24, one month after the company shortlisted candidates. Before the final bid, Doosan Group notified the shortlisted companies that it will carry out the sale of Doosan Infracore without shouldering the contenders the DICC litigation risk, vowing to turn Doosan Infracore into a clean company in which the buyer will not have to worry about the lawsuit involving DICC and contingent liabilities, said sources.

Under the proposal, Doosan Group plans to demerge Doosan Infracore into a business company that is responsible for main operations and an investment unit with U.S. construction equipment maker Doosan Bobcat as a subsidiary. The company put on sale is the business operation, while contingent liabilities related to DICC will remain with the investment unit.

If Doosan Group takes care of all contingent liabilities related to DICC, the sale of Doosan Infracore, which is expected to fetch as much as 1 trillion won ($897.2 million), should pick up speed, an unnamed market official said.

The ongoing lawsuit with local private equity funds over DICC has been a big hurdle to the Doosan Infracore sale.

In 2011, Mirae Asset Private Equity, IMM Private Equity, and Hana Financial Investment took out loans to acquire a 20 percent stake in DICC for 380 billion won with a plan to repay the debt through an initial public offering (IPO) of the Chinese unit or sale of their stakes to a third party. But the IPO was canceled due to DICC’s poor earnings, which also soured its sales prospect. 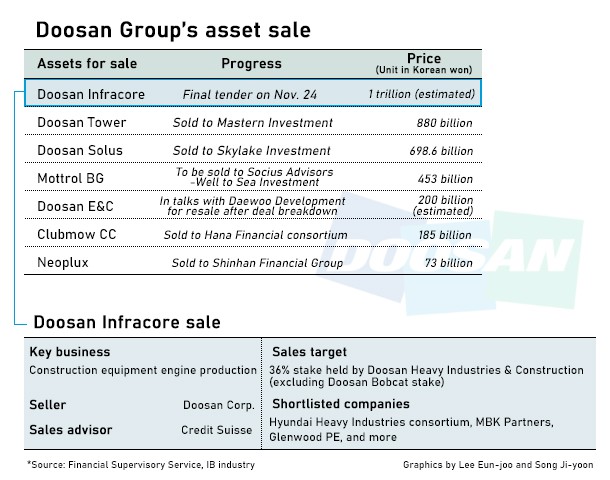 이미지 확대
The PEFs in 2015 filed a lawsuit against DICC’s largest shareholder Doosan Infracore, holding the parent company responsible for the flopped deal. The case is now in the Supreme Court, with the two lower courts having ruled in favor of the PEFs. If Doosan Infracore losses, it could face 700 billion to 1 trillion won in damages.

Until recently, the Hyundai Heavy Industries-KDBI consortium has been considered the most potential bidder for the sale. Hyundai Heavy Industries showed strong determination to buying Doosan Infracore as it will be able to up its share in the construction equipment market to up to 65 percent, allowing bigger presence of its affiliate Hyundai Construction Equipment. It also picked KDBI, an investment unit under state lender Korea Development Bank as its consortium partner.

Market insiders also described Eugene Group and MBK Partners as a dark horse in the bid as they have been working under the table to win the bid. Eugene Group that is engaged in construction material business is hoping to create immediate synergy with the construction equipment unit. It also has a previous buyout experience of Hi-Mart in 2011.

Another unnamed market official said that with an ease in uncertainty over DICC, the sale of Doosan Infracore has taken a new turn. The official added it will also be possible for Doosan to reap 1 trillion won or more from the sale.