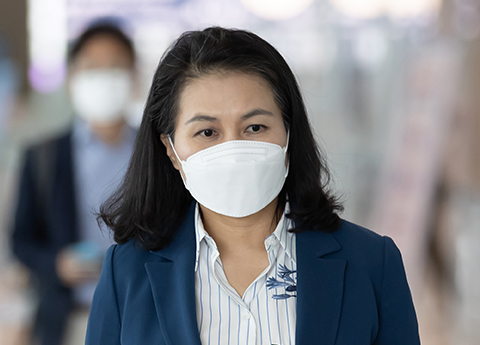 South Korea is studying the option of withdrawing the bid by South Korean trade minister Yoo Myung-hee for the highest title at the World Trade Organization (WTO) in respect to the overwhelming preference of her Nigerian rival by member countries and as not to stoke conflict within the trade body from a possible veto from Washington.

The government is concerned about the outcome if Yoo stays in the race as little time is left to turn the tide and may come to decision before the final meeting on Nov. 9, according to multiple government sources.

Washington has publicly backed the Korean minister at the WTO and in a separate statement.

“The United States supports the selection of Korean Trade Minister Yoo Myung-hee as the next WTO Director-General,” the Office of the U.S. Trade Representative said in a statement on Wednesday (local time). “Minister Yoo is a bona fide trade expert who has distinguished herself during a 25-year career as a successful trade negotiator and trade policy maker. She has all the skills necessary to be an effective leader of the organization.”

It added that Ms. Yoo with “real, hands-on experience in the field” is the right person who can lead reform in the WTO which is “badly needed.” 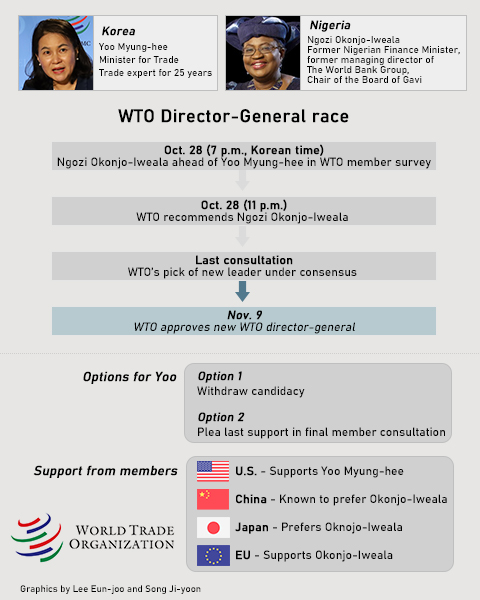 이미지 확대
A WTO chief is selected on member consensus and hinges largely on the decisions by economic majors of the U.S., China and EU. If U.S. sticks to its choice, WTO may go to a vote, which has never happened before. A vote could mean exclusion of the U.S. and further endanger trade order.

On Wednesday, three WTO ambassadors – the troika – including WTO General Council Chair David Walker announced after a closed-door meeting in Geneva that Ngozi Okonjo-Iweala, former Nigerian finance minister pitted against Yoo in the final round, should be the next chief as she won cross-regional support.

Reuters quoted WTO spokesman Keith Rockwell as saying that “all of the delegations that expressed their views today expressed very strong support for the process, for the troika and for the outcome, except for one - the U.S.”