이미지 확대
Naver Corp. fast sprawling into big-tech company based on its most used portal platform in South Korea, reported Thursday quarterly-best revenue and income more than doubled from the previous quarter and year in July-September period as it emerged as the biggest winner from accelerated online migration from pandemic environment.

Shares opened a tad weaker in early morning session and then recovered the loss, closing Thursday unchanged at 298,500 won in Seoul.

Naver’s third quarter revenue when including its Japan-focused messenger app operator LINE Corp. reached 2.06 trillion won in the July-September period, topping 2 trillion won for the first time on a quarterly basis. Naver excluded LINE’s consolidated earnings from its disclosure from the cited quarter as its business merge with another portal Yahoo Japan passed anti-trust review. 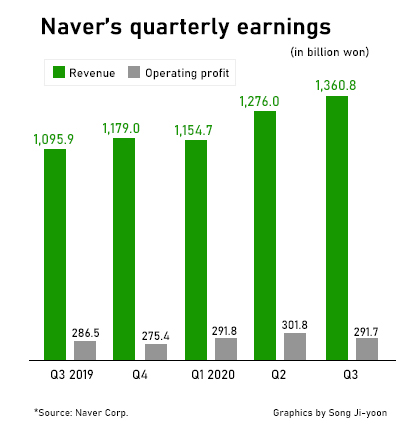 이미지 확대
By business, the company’s search platform raised 710.1 billion won in revenue, up 4.7 percent on quarter and 8.2 percent on year. The surge was backed by expansion in performance advertisements and efforts to improve advertisement efficiency.

Commerce unit raised 285.4 billion won in revenue in the July-September period, up 11.4 percent on quarter and 40.9 percent on year thanks to steady growth of online shopping amid the pandemic that led consumers to rely on online tools under social distancing measures.

Fintech business saw revenue go up 5.7 percent on quarter and 67.6 percent on year to 174 billion won in the third quarter on growth in Naver Pay transactions.

Contents business raised 115 billion won in revenue in the third quarter, up 1.8 percent on quarter and 31.8 percent on year driven by a surge in global demand for webtoons.

Cloud business also saw revenue increase 19.1 percent on quarter and 66.2 percent on year to 76.3 billion won backed by growth in services throughout including surge in clouding demand under pandemic-led non-face-to-face environment.

Han Seong-sook, chief executive Naver, said that the company achieved stellar performance in the third quarter thanks to solid growth in new growth businesses such as commerce, fintech, contents, and cloud. She said Naver will continue to enhance global competitiveness based on synergy with various global partners.