S. Korea’s jobs down by biggest in 5 mos, idled population largest-ever in Sept

South Korea shed nearly 400,000 jobs in September, the biggest loss in five months, while the idled in economically inactive category stretched to the largest-ever for the month due to resurgence and prolongation of Covid-19, data showed Friday.

Accommodation and restaurant, education service, and wholesale and retail sectors cut most jobs as the resurgence of Covid-19 led to business shutdowns and rigid social restrictions nationwide. 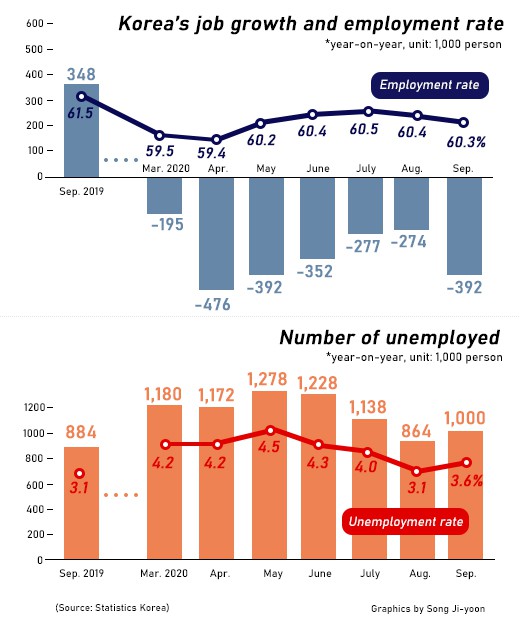 이미지 확대
The employment rate for those aged 15-64, which is the standard of the Organization for Economic Cooperation and Development (OECD), fell 1.4 percentage points to 65.7 percent, also the lowest for the month since 65.9 percent in September, 2014.

The youth employment rate – those aged between 15 and 29 – in particular, fell 1.6 percentage points to 42.1 percent, data showed.

The number of unemployed reached 1 million in September, up 116,000 from a year ago, marking the biggest increase since May. The jobless rate rose 0.5 percentage points to 3.6 percent.

Naver pushes rivalry with Kakao to crypto, pitting LINK vs KPLAY on Bithumb