Hyundai Mobis to reinforce localization in China amid mounting losses 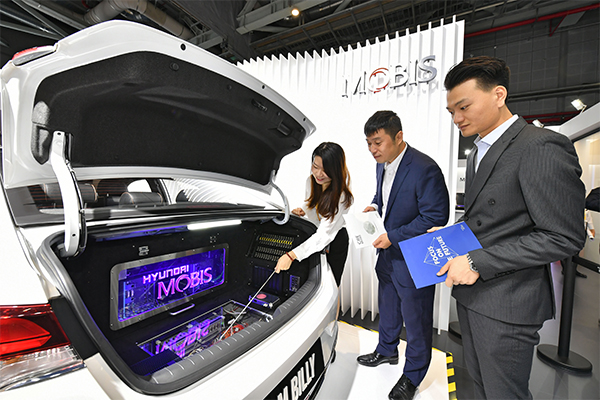 Hyundai Mobis Co., the auto part unit of South Korean conglomerate Hyundai Motor Group, has set out to accelerate localization in China to prop up profits in its most important overseas market.

The company announced Thursday its five China localization strategies for 2020 at the China International Import Expo in Shanghai. The scheme indicates a willingness to significantly reduce the role of Korean headquarters while handing over more authority to Chinese offices to promptly respond to local needs.

China is a key market for Hyundai Mobis. Orders have been surging in recent years, from $150 million in 2015 to $730 million in 2018. This year, they are expected to top $800 million. China is now responsible for about 38 percent of the company’s total global orders, which are targeted this year at $2.1 billion.

Despite the growing demand, the company has been racking up huge losses in the country. Its Chinese operations slipped into the red in the fourth quarter of last year, and have been posting operating losses for the past four quarters. Its losses in China over the past year now total 250 billion won ($216.2 million).

Experts blame this largely on China’s stagnating auto market. Hyundai Mobis’ auto making affiliates and its key customers, Hyundai Motor and Kia Motors, were forced to shut down some of their Chinese plants earlier this year amid flagging sales. The auto duo’s output in China in the first half plummeted 20.4 percent on year to 441,560 units.

A Hyundai Mobis executive in China said customized development and lead time reduction are now “a necessity, not an option” given the country’s flat auto sales and intensified market competition.

Under the new localization outline, Hyundai Mobis plans to bolster research capabilities in China so that local units can take initiative in developing core components. It intends to build a seamless R&D system that ties together its research facility, quality management center and open innovation center to create greater synergy throughout the development process.

The company will also install a new team focused on improving cost competitiveness. It would be tasked with formulating cost-reduction strategies from the design stage and oversee the entire process to come up with an appropriate pricing of the product.

A new sales center would also be set up to identify new local partners and strengthen regional sourcing capabilities.

The company plans to fine-tune its sales strategy by product, company and region to better respond to client demands. It would also ramp up its marketing efforts and create more opportunities to show off its products by actively participating in various exhibitions and tech shows across the country.

By Park Yun-gu and Kim Hyo-jin