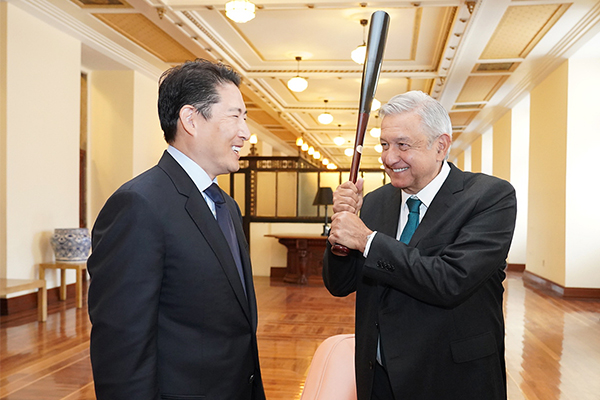 Hyosung Chairman Cho Hyun-joon (left) meets with Mexican President Andres Manuel Lopez Obrador at the Presidential Palace in Mexico City on Wednesday to discuss plans for business cooperation. Cho gave a baseball bat with the signature of South Korean baseball player Choo Shin-soo who plays for the Texas Rangers of Major League Baseball, to Obrador who is known as a huge fan of baseball. [Photo by Hyosung]

Showing his appreciation to the Mexican government for granting Hyosung TNS the opportunities to participate in the large-scale project, Cho also expressed his hopes to join more projects such as power grid establishment and renewable energy business to make further contribution to not only enhancing quality of life of Mexican people but also the country’s economic development.

“I was deeply impressed by the Mexican government’s people-first policy and philosophy,” said Cho, adding that the ATM project would serve as a precious opportunity for Hyosung to fulfill corporate social responsibility. Obrador said in response that the government hoped a close cooperation with Hyosung who has the world’s best technology for ATMs and he looked forward to seeing each other once again after completing the project successfully.

After the meeting, Cho visited a welfare center that has been running on a trial basis in Mexico City to check Hyosung’s ATM. The Mexican government initiated the project to make it easier for welfare beneficiaries to receive government subsidies by establishing ATMs in rural areas. Hyosung TNS will supply 8,000 units of ATMs by 2020 to increase its share in the Mexican market from current 2 percent to 15 percent.

Cho has been accelerating his efforts to expand the group’s presence in the broader global market since he took the helm of the group in 2017. He met with Indian Prime Minister Narendra Modi, Vietnamese Prime Minister Nguyen Xuan Phuc in 2018 to seek for business opportunities in the countries. He also signed a business agreement with Saudi Aramco CEO Amin Nasser in June to extend strategic partnership in carbon fiber development.