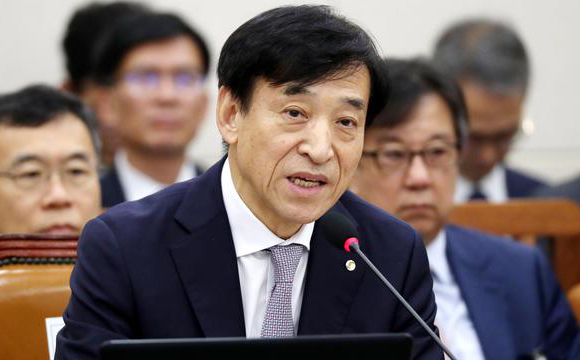 Bank of Korea Governor Lee Ju-yeol speaks before lawmakers of the finance committee at a parliamentary session on Tuesday. [Photo by Kim Ho-young]

South Korea’s central bank chief did not think the country’s economic growth would fall under 2 percent this year or negative interest rates to continue, but nevertheless agreed on the need for more “aggressive” fiscal and monetary actions should concerns for deflation increase.

In a parliamentary inspection session on Tuesday, Bank of Korea Governor Lee Ju-yeol told lawmakers of the finance committee that “signs are not imminent for deflation at the moment” but if concerns about falling prices grow, Seoul “should take more aggressive fiscal and monetary action.”

Lee’s remarks were made in response to a question raised by lawmaker Yoon Young-suk of the main opposition Liberty Korea Party about the possibility of monetary easing going as low as zero percent territory.

Korea’s policy rate is currently at 1.50 percent, one cut above the historic low of 1.25 percent. The market widely believes the rate would be cut to 1.25 percent in the upcoming policy meeting next week.

He cannot define the “effective low” for interest rates in Korea, which does not have internationally trading currency like the United States, Europe and Japan who all tested zero or even sub-zero interest rates.

He said rate cuts no longer have the same effect in aiding the economy. “Fiscal policy can be more effective” in stimulating the economy, he added.

Korea’s economy has been struggling from low inflation amid sluggish domestic demand. Korea has experienced negative inflation for the first time ever in August and September.

He agreed with fiscal authorities that negative interest – mostly stemming from supply factors – won’t last. While predicting the economy will underperform 2.2 percent estimated by the central bank, the growth this year won’t likely go under 2 percent. The BOK is expected to revise down growth outlook for this year and next on Nov. 29.