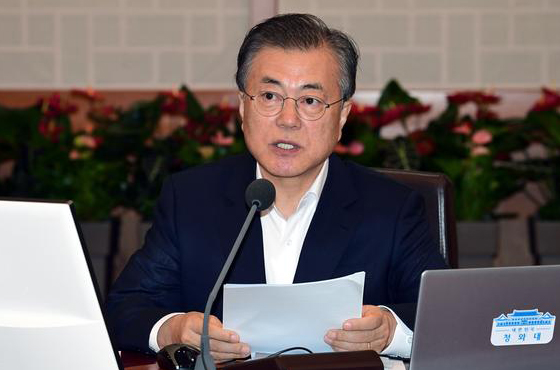 While observing the economy up against “grave” challenges, South Korean President Moon Jae-in on Tuesday urged his administration to accelerate policy actions and demonstrate fiscal “will” to use the momentum to hone competitiveness of the country.

While raising vigilance, the government must rein in the spread of bogus news and skepticism that can trigger unnecessary anxieties and uncertainties in the market, Moon said Tuesday at a cabinet meeting.

“We must turn domestic and external challenges as an opportunity to strengthen stability of our economy and boost competitiveness.”

Asia’s fourth largest economy faces multiple whammies amid intensifying trade conflict between the United States and China and the country’s own tit-for-tat trade war with Japan.

“We must show our policy will to combat the challenges and vitalize the economy in our budget,” he said.

On the same day, the ruling Democratic Party of Korea and the government held a consultative meeting and reached an agreement on an “economy-accommodative” fiscal budget for next year. The ruling party proposed another super-sized budget of 530 trillion won ($434.8 billion) for next year, which would be up nearly 13 percent from this year’s record 469.6 trillion won budget. It proposed at least 2 trillion won earmarked to aid companies against Japan’s export curbs.

“Growth momentum has slowed down due to growing uncertainty in the external economy, but fundamentals remains robust, Moon said, adding that the credit ratings agencies have kept Korea’s sovereign rating unchanged at one of the highest in the investment grade because of strong fundamentals of fiscal soundness.

“We must not stall policy changes to adapt to new environment due to conflict of interests with the mainstream industries, he said, calling for stronger deregulatory actions.

“[The government] should strengthen monitoring in areas such as investment, spending, and exports, and put out efforts to boost domestic consumption by nurturing service industry,” Moon said.