이미지 확대
The amount of state allowance going to job seekers who recently lost jobs broke another record in July, suggesting no end to the stagnation in the Korean job market.

The Ministry of Employment and Labor announced that the government shelled out 758.9 billion won ($622.7 million) in allowances for the unemployed during job-seeking period in July, surging 30.4 percent from 582 billion won for the same month last year. The figure hit a new record high, surpassing the previous record of 758.7 billion won in May.

Job search allowance is a type of unemployment benefit offered by the government for people who lose employment insurance benefits due to unemployment.

Experts attributed the sharp gain in July to the unfavorable job conditions which led to an increase in involuntary unemployment. According to the ministry data, the number of beneficiaries of the allowances rose 12.2 percent from the same month last year to 500,000 in July, with the number of new applicants up to 101,000. 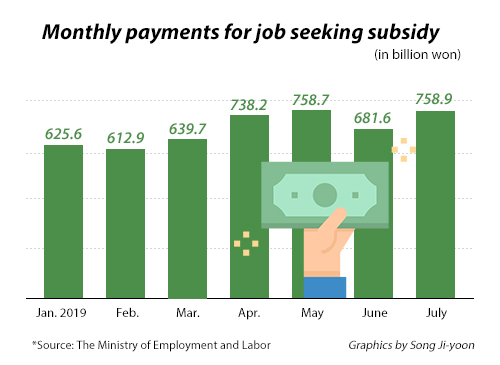 이미지 확대
The government added the increase in the government subsidy was also driven by the rise in the number of people covered by state-run employment insurance, thanks to its pro-labor policy that encourages small- and mid-sized businesses to expand the coverage to as many workers as possible. The number of people holding employment insurance coverage in July amounted to 13,722,000, up 4.1 percent from a year earlier.

In the industries under the impact of Japan’s curbs of Korea-bound exports of high-tech materials, the number of workers covered by employment insurance rose by 600 for the electronics and telecommunications sector and 4,500 for the chip making sector. The number fell by 3,700 in the electronic component manufacturing industry.