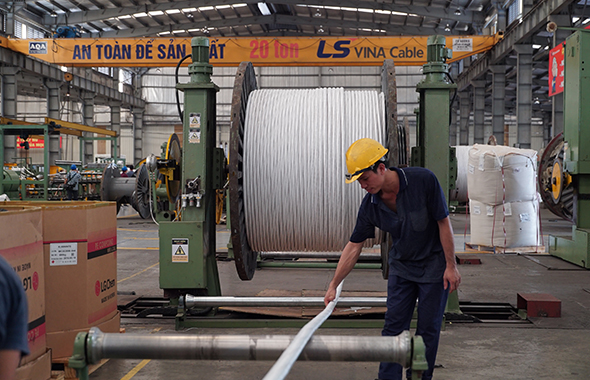 The expansion will bump up MV cable capacity at the plant of LSCV, LS C&S Asia’s second Vietnam factory in Ho Chi Minh, from current $93 million worth level to $120 million worth, which would cover the half of the entire demand in Vietnam.

LS C&S Asia estimated that the Vietnamese MV power cable market would grow more than 10 percent per year thanks to the ongoing projects to install underground cables in Ho Chi Minh and new town development plans in neighboring regions.

The company decided the expansion just a year after it ramped up the manufacturing facility in April last year in Vietnam, suggesting that the country’s cable supply still falls far behind demand. LS C&S Asia has additional expansion plan for the country, in which more than half of the nation is still deprived of power supplies, said its chief executive Kwon Young-il.

LS C&S Asia as the No. 1 power cable supplier in Vietnam runs two Vietnamese units of LS-VINA and LSCV. LS-VINA, located in Haiphong, produces power cables and copper rods, and LSCV communication cables and MV power cables. It added a manufacturing line for low-voltage power cables in Yangon in May 2017 to take the lead in Myanmar.

Thanks to the burgeoning cable demand, LS C&S Asia posted an operating profit of 6.66 billion won in the April-June period, up 73.6 percent on from a year ago. Net profit soared 91.2 percent on year to 4.21 billion won, and sales jumped 21.6 percent to total 135 billion won during the period.