Hana Financial Group said on Wednesday that it was informed of a decision favoring the banking group from the International Center for Settlement of Investment Disputes (ICSID), an international arbitration institution under International Chamber of Commerce (ICC). The ruling comes after Texas-based buyout fund Lone Star brought an arbitration case against the financial group in August, 2016, claiming that Hana Financial Group relied on the country’s financial authority during the negotiation process of the KEB takeover from the fund and brought down sales price.

Three arbitrators recommended by each Lone Star, Hana Financial Group, and ICC wrote out decisions on April 16 and sent them to the ICC tribunal, which were reviewed by the ICSID over three weeks for any flaws and recently completed approval. A final decision was sent out to the arbitrators for signature before being sent to parties involved in the case – Hana Financial Group and Lone Star.

In 2003, Lone Star acquired a controlling 51.02 percent stake in financially-stressed KEB, Korea’s then fifth-largest bank, through its Belgian subsidiary, for 1.38 trillion won ($1.16 billion). The sale was very contentious as controversial issues were involved such as that the bank was being sold at a much cheaper price than actually valued and approval was given by regulators that judged KEB needed outside help to overcome financial distress. In 2006, three years after the acquisition, Lone Star was labeled as so-called “meoktwi,” or eat and run capital, when it said it will sell KEB to British banking company HSBC.

The National Assembly at the time said the sale of KEB itself was “illegal,” as under Korean law, non-bank entities, like Lone Star, could not become a controlling shareholder of a Korean bank unless the bank was in financial distress. The government claimed KEB was in financial distress as a result of the Asian Financial crisis in 1997-1998, but the bank quickly turnaround, raising suspicions that KEB was sold off unfairly. The National Assembly accused related officials involved in the Lone Star sale, prompting the Board of Audit and Inspection to launch an investigation.

In December, 2006, the Supreme Prosecutors’ Office accused Byeon Yang-ho, former finance ministry official, and KEB president Lee Kang-won for colluding with Lone Star during the sale negotiation process and that they intentionally under-evaluated KEB assets and overstated losses to drive down price. 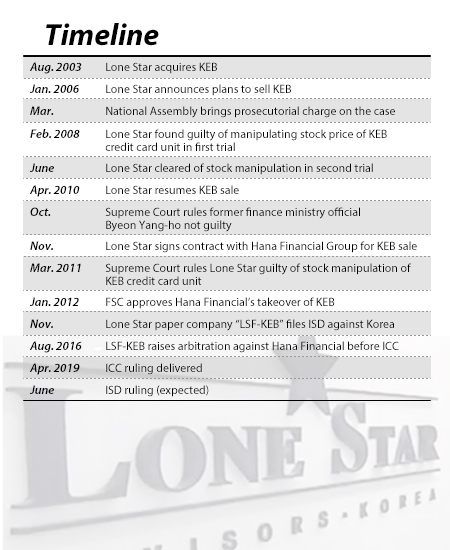 
Amid investigations, Lone Star quickly tried to exit KEB. In September, 2007, it signed a contract with HSBC to sell shares in KEB for $6.3 billion. The Korean regulator, however, did not approve, leaving HSBC in the end to give up on KEB shares.

It was only in 2012 that Lone Star was pushed out and exited KEB by selling shares to Hana Financial Group, but at much lower price after approval was delayed by the Korean government. The financial regulator said it was not able to approve the sale because of ongoing investigations and trials involving Lone Star at the time including allegations over stock manipulation.

That year, in November, Lone Star filed a suit against the Korean government before the ICSID under investor-state dispute (ISD). It claimed that the fund had to sell KEB at much lower price because the regulator delayed approval procedure and it unlawfully raised taxes on its investment profit. It claimed that it should pay taxes to Belgium, where its subsidiary is based in, under Korea-Belgium bilateral investment treaty, but taxes were instead collected by Korea’s National Tax Service.

With Hana Financial Group winning the ICC case, industry watchers noted that Lone Star has lost its claim that Hana Financial mingled with the Korean government to lower sales price at the time.

The result of the ISD case is also expected to come as early as next month.

By Kim Dong-eun and Lee Eun-joo