이미지 확대
South Korean exports are expected to finish 2019 in the biggest negative number in a decade after keeping up a losing streak for the 12th month by November.

According to data released by the Ministry of Trade, Industry and Energy on Sunday, the country’s exports came to $44.1 billion in November, down 14.3 percent from a year ago.

Exports have been falling against a year ago since December, the longest since the 19-month losing streak from January 2015 to July 2016. The loss has widened to double digits since June, on path to close the year in contraction for the first time since 2016 and in the biggest negative number since 13.9 percent plunge in 2009 in the wake of the global financial crisis. 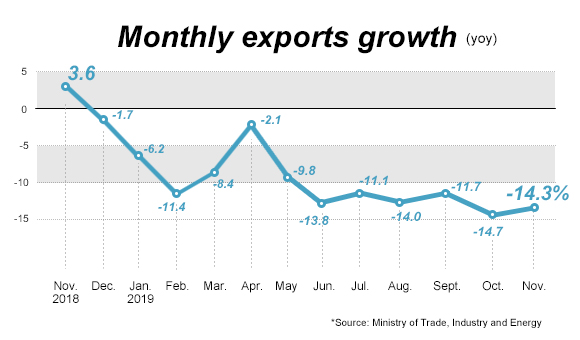 Korea’s imports in November totaled $40.73 billion, down 13.0 percent from the previous year, resulting in a trade surplus of $3.37 billion, staying in the black for the 94th consecutive month.

The ministry raised hope for exports from December, citing stable growth in export volume. On a rise in trade of new export items, the contraction in the country’s exports will be eased from December, said a ministry official.