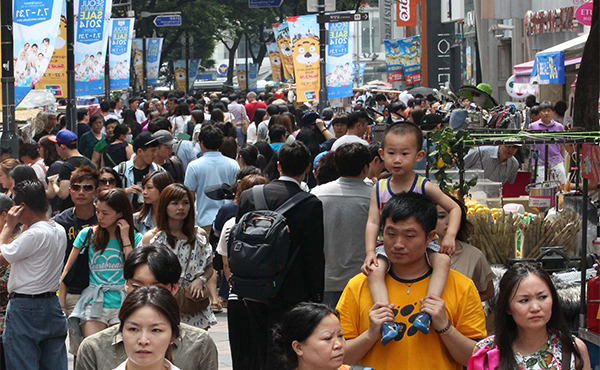 이미지 확대
The foreign national population has rapidly grown in South Korea over the last five years, with Korean-Chinese making up the bulk of the population, a government survey showed on Wednesday.

According to the 2015 census report by Statistics Korea, the number of foreigners living in South Korea came to 1.36 million in 2015, accounting for 2.7 percent of the country’s total population. The figure is a 41.6 percent increase from 960,000 in 2010. The number of multi-racial households formed from marriage stood at 299,000, making up 1.6 percent of all households.

They were followed by Vietnamese with a 9.3 percent share, Thai nationals with 5.7 percent, Americans with 4 percent, Filipinos with 3.8 percent, Indonesians with 3.1 percent and Cambodians with 3 percent.

The Korean-Chinese population has increased 42.3 percent from 2010 to 2015, much higher than a 16.8-percent growth of a Chinese population. The number of those from Myanmar, Cambodia and Nepal has more than tripled, too.

Among the foreign national residents, 860,000, or 62.9 percent, lived in Seoul and neighboring cities, and those in their 20s accounted for 28.1 percent of all foreigners in Korea. The number of foreigners living in Jeju Island, the country’s most popular resort island, has more than doubled to 15,000 last year from 7,000 in 2010.

One fifth of multi-cultural households were formed from marriage. One of a multi-national married couple is Korean, and the other is a marriage immigrant. Marriage immigrants were mostly from Vietnam. Among those who were naturalized as a Korean citizen, former Korean-Chinese represented about half, with 74,000.

The standard of living of multi-cultural households was lower than that of ordinary households. Multi-cultural families lived more in multi-unit houses including studios than large-sized apartments in affluent areas.